In automotive manufacturing, cable carrier systems for coolant filling systems in are subject to very special requirements. On one hand, they have to transport a variety of flexibles, while on the other hand, the cable carriers have to be extremely robust and very reliable. Ready-to-install TOTALTRAX complete systems from TSUBAKI KABELSCHLEPP have proven successful in modern filling systems by SAT STERLING.

SAT STERLING developed special systems for automatic coolant filling for a renown customer from the automotive industry. The systems consist of two modules: The base unit – which does not necessarily have to be positioned at the production line – is responsible for temperature-dependent mixing of the coolant. This is then transported to the mobile unit, which follows the vehicle on the right or left of the assembly track and fills it with the corresponding fluids while moving.

The mobile units usually move along gantry systems which are mounted on the ceiling of the production line, at a height of up to six meters. Cable carriers from TSUBAKI KABELSCHLEPP are their “lifelines”, supplying them with power. The cable carriers also contain other cables and hoses for vacuum, compressed air, signal and, last but not least, coolant. In total, these special cable carriers can transport up to five media at the same time.

TSUBAKI KABELSCHLEPP supplies these cable carriers as ready-to-install assemblies – including all cable, hoses and connectors. The complete systems are based on cable carriers of MC1250 type, which are robust plastic cable carriers with aluminum stays. In this application, they are used in a gliding arrangement; the cable carriers are equipped with glide shoes. The end customer from the automotive industry made precise specifications for the cables and connectors, which were accurately implemented by TSUBAKI KABELSCHLEPP. In addition, the hydraulic package was integrated into the TOTALTRAX complete system. Beside the customer-specific requirements, a special focus during the development of the system was on a high level of reliability. An availability of 99.9 percent had to be ensured for the SAT STERLING systems, which also applied to the cable carriers. 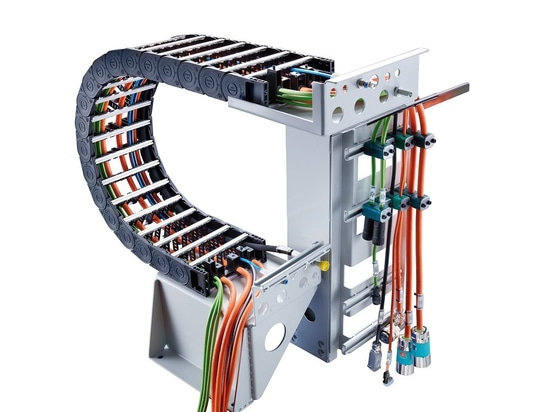 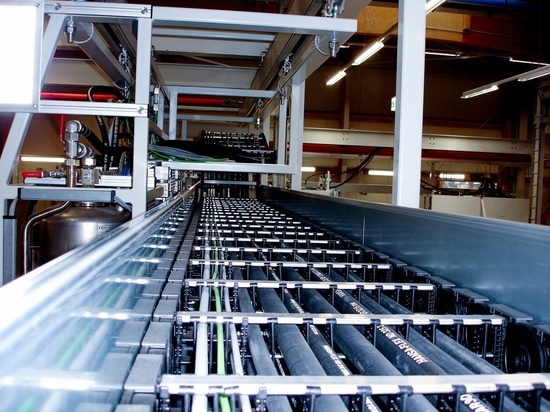