The EHPS is designed to lift and lower large bodies of equipment in next-generation mobile vehicles. On lowering, the pump/motor can be used in reverse as an electric generator, while upon lifting, stored energy can be reused to reduce load on the diesel generator. For example, a hybrid wheel loader achieved a 50% reduction in its energy requirement. The system’s high-power density also allowed a smaller frame to be used. Furthermore, the project saw hydraulic heat significantly reduced, which, in turn, allowed downsizing thermal management hardware, such as the pump, fan motor, fan, and radiator. Significant energy savings have also been realized in real-world applications.

The Electrification Test Cell uses the flexibility of programmable electrohydraulic pumps to replicate a large range of loading and duty-cycle profiles, while monitoring system efficiency, energy usage, and concept performance. Parker technicians and engineers can validate the capabilities and savings with EHPS using customer-provided parameters. Future risk levels are significantly reduced because system and software can be developed, diagnostics validated, functional safety confirmed, and lifetime reliability testing completed. All of this can be accomplished in a timeframe much shorter than would otherwise be possible, and data can be shared remotely over the IoT.

The Electrification Test Cell uses a second motor as the load, so no cylinders or weightlifting are required. Therefore, a wide variety of loads, speeds, and other parameters can accurately and quickly replicate customer applications. The upshot is high efficiency and low peak power usage. Parker’s IQAN electronic control monitors system parameters such as pressure, temperature, flow, and speed. Each specific system configuration in the cell can be quickly replicated and tested.

Electrification of mobile hydraulics, such as Parker’s EHPS, offers several advantages—not the least of which is the potential to use a smaller diesel or gas engine to operate a vehicle’s hydraulics or eliminate the engine altogether. Additional benefits include energy recovery, power on/off demand, and lift/lower operation independent of the ICE speed or torque.

For those looking to validate the capabilities and savings on offer with EHPS, reduce future risk levels, and significantly shorten time to market, the availability of Parker’s Electrification Test Cell can help get customer products to market faster and with lower risk. 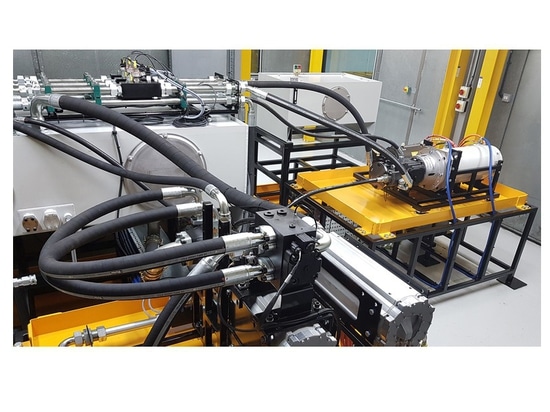 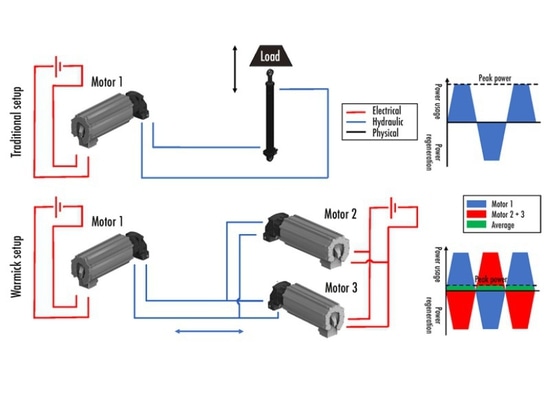 This schematic compares a traditional setup using a cylinder and physical load to conduct testing of an electrohydraulic pump drive. The lower setup uses a pair of hydraulic motors to conduct similar testing to dramatically reduce power requirements.