Vehicle Maintenance Gets a Lift From Hydraulics

“Before we had the portable lifts, we’d be on our backs under the trucks to fix hydraulic leaks or suspension components,” says Paul Ramirez, solid waste fleet maintenance supervisor for Las Cruces, New Mexico Utilities (LCU). Now, with six mobile-column hydraulic lifts, the maintenance crew can raise a massive refuse truck quickly to perform routine maintenance or make emergency repairs, even with a full load of solid waste still in the truck. A permanent hoist system would have taken up valuable floor space when not in use, but the portable lift system can be moved and stored easily until needed.

The mobile column lifts, made by Rotary Lift Inc., Madison, Ind., work together in groups of four or six to raise heavy vehicles, one for each wheel, for maintenance or repair. Their adjustable wheel forks can accommodate different wheel sizes. Unlike hoists that use wired pendants, the mobile columns are wireless and remotely controlled, allowing a technician to monitor and adjust the columns from anywhere in the shop, even during the lifting process. There are no cables or hoses to drag and wear or cause hazardous interference for technicians, and no keys or chips are required.

Each column is powered by a 24-V dc motor driving a gear pump that operates the lift cylinders, using ISO32-weight hydraulic oil. Rotary Lift manufactures the columns in a range of sizes, with lifting capacities up to 18,800 lb each. The columns and remote control communicate with each other on a Zigbee network (a type of military-grade communication) through the manufacturer’s RedFire controller. One controller is a master, while the others are slaves that report data back to the master. Each column has a string potentiometer that reports its position. When the columns are grouped together, they maintain the “level” position at which they were grouped. The controls allow columns to be grouped and operated in pairs. They also can be unlocked and operated separately.

Technicians simply follow the control’s commands, and the remote-control auto-detects and connects to communicate with the columns. All columns are synchronized from the remote, which saves critical setup time because the technician doesn’t have to wait at each column’s control panel for it to sync before moving to the next. Columns have displays showing vehicle height and weight and also incorporate a LockLight feature that indicates when the lift’s locks are set. The lifts are gravity-lowered to conserve battery power, with safe, controlled descent managed by two counterbalance valves controlled by the RedFire controller.

Each column is mounted on three wheels and is completely portable. The wheels are spring-loaded, so they retract as soon as any of the vehicle’s weight is transferred to them. Once they are retracted, the column’s base structure rests firmly on the ground, eliminating the possibility of movement. A brake on the unit’s rear wheels helps keep the column in place until the wheels retract under load. A steering handle also can activate the brake. When the handle is moved after a vehicle is lowered, it releases the brake, allowing the wheels to extend so the column can be pulled or pushed to a new location.

The 24-V batteries in the columns are charged individually through a 110-V charging station. Frequency of charging depends on the weight being lifted, any connected accessories and battery maintenance, but some users get several weeks of use before recharging. LCU’s Ramirez says his department typically charges every three days to be sure the columns are always ready for use. Because LCU operates a single daytime shift, the batteries are charged overnight.

Ramirez says a loaded truck can weigh more than 60,000 lb., and if a truck is full of a decomposing load when a breakdown occurs, it’s important to get it running quickly, especially in New Mexico’s heat. His department maintains a fleet of 35 trucks, including residential side-loaders, commercial side-loaders and front-loaders, grapplers, and roll-offs. He says he originally considered getting a permanent four-post hoist but realized it would restrict the use of his shop space.

He explains, “There are times we need the room, so the individual lifts were a better solution. They give us more space when we need it.” They also provide greater flexibility and can be used in groups of four instead of six for lighter two-axle trucks. He adds that his number-one reason for choosing the mobile column lifts was safety for technicians who need to work underneath a vehicle. The ergonomics are better, so workers can avoid the strain they would otherwise face if they had to work on the floor. With better accessibility, they can do their work easier and faster. 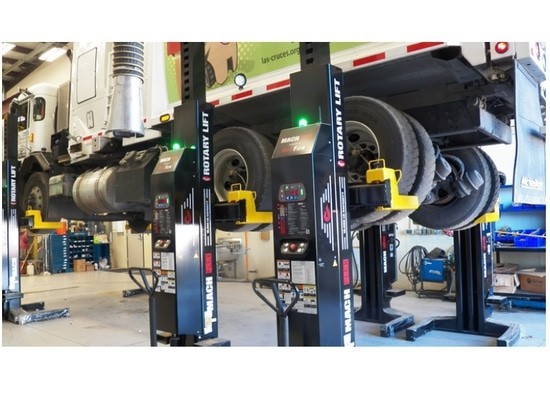