Pico Interactive Is One Of The Best Kept Secrets In VR

Pico Interactive has been quietly releasing some of the best standon alone enterprise VR headsets to date. Here's a hands-review of the company's G2 4K headset and a preview of the Neo 2.

Unless you've been deeply entrenched in the VR space for years you might be forgiven for not knowing about Pico Interactive. While big names in VR hardware like HTC and Oculus have only recently shifted their focus to creating standalone headsets (ones that do not need external sensors or a PC to operate), standalone has been Pico's focus from the very beginning.

The San Francisco-based company, made a quiet, but significant, showing at the 2016 Electronic Entertainment Expo (E3) with a small, standalone headset called the Pico Neo. The Neo was an Android-based gaming headset that actually boasted some impressive specs for its size. It was based on the same Snapdragon 820 chipset, offered a 90 Hz refresh rate, and a 110-degree field of view.

When we spoke to Pico in 2016, Ennin Huang, Pico's VP of Design, said the company's vision was pretty straightforward – "We really wanted to push VR and make it affordable for everyone without comprising the graphics and experience."

The way to do that, Huang said, was by offering users a lightweight, untethered experience.

The Pico Neo didn't make a big splash in the US. But it turned out Huang was right.

In recent years VR hardware makers have pivoted into offering headsets that are not only lighter and more powerful, but, most importantly, standalone. The latest hardware from Oculus, the Oculus Quest, is an all-in-one headset targeted at gaming with six degrees of freedom (6DoF) tracking. The Quest, the less robust Oculus Go, other standalone models such as the HTC Vive Focus, and the (fortunate) death of smartphone-based VR headsets point to one clear trend for future of VR hardware – wireless, standalone, and powerful.

But Pico Interactive hasn't stood still. In recent years the company has pivoted into targeting its headsets specifically at engineers, designers, and other enterprise users – with the aim of providing a convenient and mobile experience for applications ranging from virtual prototyping and design, to education, and even medical applications.

Design News had a chance to go hands-on with one of Pico Interactive's flagship enterprise headsets, the G2 4k, and found it to be one of the best overall user experiences to date. The G2 4K is very light (276 grams according to company specs) and very well-balanced. The 4K resolution, comes through crystal clear thanks to LCD displays and the use of fresnel lenses (which also help contribute to the unit's light weight).

“We conducted a lot of human-factors study for the G2 4K,” Huang told Design News in a recent interview. “There are two main strategies for tackling the overall weight issue: First, the material for the G2 4k is carefully selected to achieve the lightest weight possible while still keeping it affordable for everyone. Second is the weight distribution – we want to make sure the overall center of the mass is somewhere close to the center of the user's head when the user is wearing the headset. To achieve that we have moved some of the components to the back of the head-padding while still keeping the form factor as compact as possible.”

With a 101-degree field of view and a 75 Hz refresh rate, the G2 4K does fall below the specs of more entertainment-focused headsets. But then again, enterprise software apps don't usually require the same high frame rates as, say, the latest action game.

The G2 4K is built on the Snapdragon 835, Qualcomm's first chipset offering targeted at mobile VR and augmented reality. It's the same chipset behind the highly-praised Oculus Quest.

Aside from the headset having its own online store (the Pico Store), the company also offers an SDK for the G2 4K that we found supports both Unreal and Unity engines. For those who might be put off by the thought of learning a new SDK or having to purchase apps within a proprietary store, the headset is also compatible with the Wave SDK for the HTC Vive line of headsets and also supports apps from HTC's Viveport. We tried running a few enterprise apps from Viveport on the G2 4K and didn't notice any difference in performance.

Where one might find disappointment with the G2 4K is that it is only offers three degrees of freedom (3DoF) tracking for both the controller and the headset, which can significantly limit user mobility depending on the application. Some enterprise users who prefer a more fixed design space won't notice the difference at all, but someone like an automotive engineer or architect for example, who might prefer to be able to walk through a virtual space at room scale, might be frustrated at having to use point-and-click navigation to move around.

Asked about the decision to give such a visually powerful headset only 3DoF tracking, Huang said the decision came down to offering a product with the right specs for enterprise users but would also provide a comfortable barrier to entry for new users. “We think 3DoF and 6DoF both have their niche in enterprise solutions,” Huang said. “While 6DOF is great for a little more advanced users, the 3DoF VR training and tutorials experience is great for someone who has never had or had a very little VR experience. In fact, many users of our enterprise-customers have never used VR before.”

Very serious enterprise users will probably opt for a PC-based setup along the lines of the HP Reverb or HTC's Vive Pro. But smaller organizations or those looking to get their feet wet in implementing VR into their workflow, and who hold high value in an untethered experience, could find the G2 4K a more economical option capable of still delivering in terms of image quality and overall performance.

At the time we spoke, Pico Interactive was shipping another headset, the Neo 1, which featured 6DoF head tracking and a 3DoF controller, in Japan, China, and parts of Europe. Huang teased that the company's R&D team was working on prototypes for headsets that offers 6DoF head and controller tracking, but declined to provide any further details.

However at CES 2020, Pico made another announcement that should please users who demand a 6DoF experience with their VR.

The company's latest headset, announced at CES 2020, is the Neo 2, a standalone enterprise headset with 4K resolution and 6DoF inside-out tracking. A second version, the Neo 2 Eye, features eye tracking and foveated rendering capabilities courtesy of Tobii, the go-to supplier of eye tracking sensors and analytics technologies for VR.

Based on the Qualcomm Snapdragon 845 platform, the Neo 2, is a bit heavier than the G2 4K (350 grams, according to specs), and features the same resolution, lenses, and refresh rate. Where the headset takes a step up from previous models in utilizing the 845's integrated simultaneous localization and mapping (SLAM) technology for room-scale 6DoF tracking. Both models of the Neo 2 also feature two mono fisheye external cameras.

For its part, Tobii says the foveated rendering technology integrated into the Neo 2 allows it to increase framerates by up to 66 percent and reduces shading loads by up to 72 percent, which gives the headset improved visual performance without sacrificing performance or draining battery life.

The addition of eye tracking also gives Neo 2 users a novel control scheme (navigating apps and menus via eye movement) and can also be used to capture gaze data to assist with training applications as well as capturing user behavior insights.

It's a pretty big leap for a company that started with mobile gaming, though Huang said Pico hasn't left its roots behind. And while enterprises may be the first to take note of what Pico is offering, Huang said the company believes first in serving VR users in any application they desire.

“Mobile gaming and entertainment are still part of our focus, and in fact, we have been doing pretty well in Asia in places like Korea, Japan, and China. In addition to the consumer market, we also see great opportunities where Pico can provide enterprise solutions for many of our business partners,” Huang said. 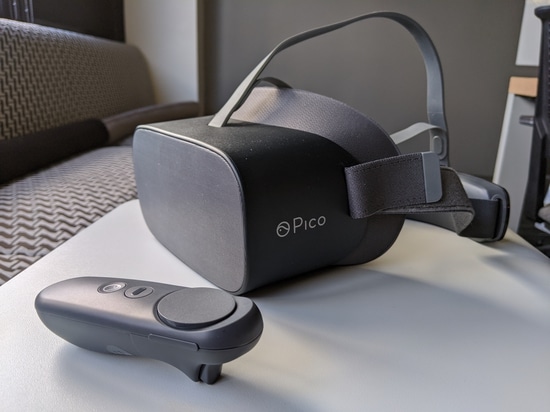 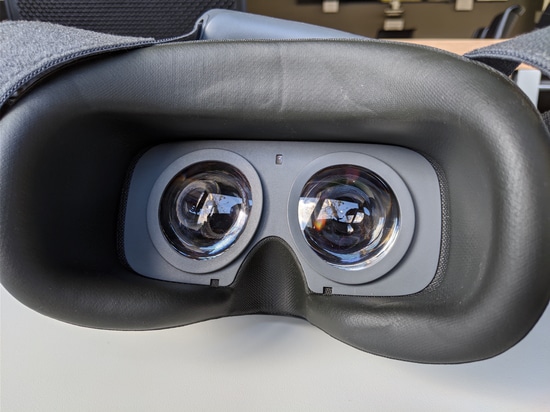 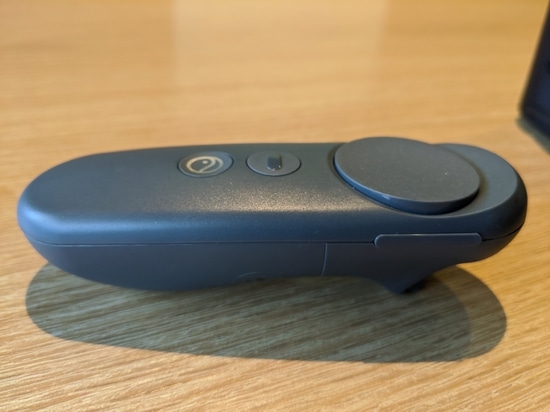 The G2 4K's controller is compact and comfortable, but only offers 3DoF tracking. 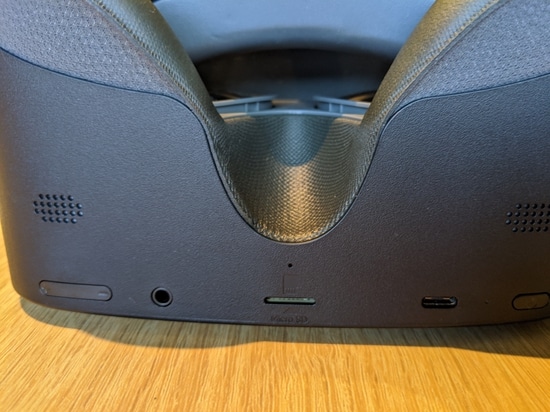 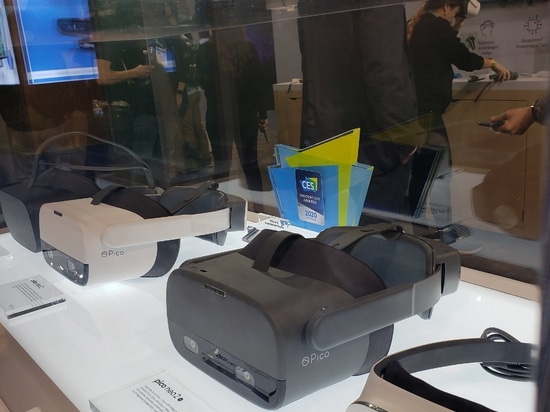