The two-track GOMACO GP360 is designed as both a slipform paver and a placer/spreader. Asa GP3 slipform paver, the new machine is capable of slip-forming up to 30 feet wide, and add a 60-inch belt, says GOMACO, and the GP360 also becomes a concrete placer/spreader for widths up to 36 feet.

The GP360 is powered by a Caterpillar C7.1 Tier 4 diesel engine with 302 horsepower for driving the conveyor belt and for distributing concrete across the grade. The high-volume, 60-inch conveyor belt can be mounted on either the left or right-side, depending on job-site conditions and the location of the haul road, and has a discharge speed of up to 492.5 feet per minute. A controllable material deflector directs the flow of concrete at the discharge end of the conveyor for placement accuracy. With the concrete placed on grade, a dual-drive auger system moves the material to the center or outer areas and across the strike-off.

The GP360’s strike-off has independent vertical adjustment to control the depth of the placed concrete without having to raise or lower the entire prime mover. The strike-off height is controlled by Smart Cylinders, independent of the prime mover. An optional sonic sensor system and GOMACO Navigator display can be added to monitor the depth of the concrete as it is placed. The G+ control system uses the information provided by the sonic sensors on the GP360 using Machine to Machine (M2M) communication. This communication between the two machines, with the ability to independently control the strike-off depth, provides an optimum and consistent head of concrete in front of the paver for maximum, smooth-pavement results, says the company. 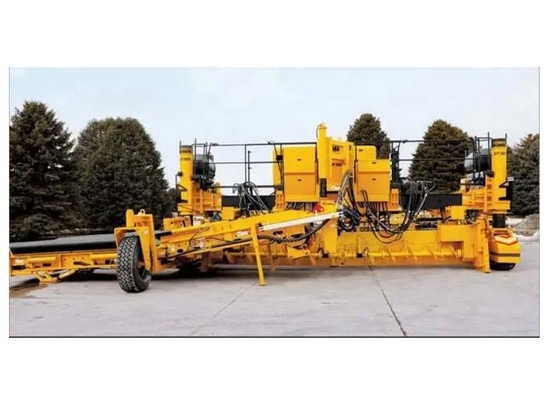