What’s the Difference Between Batteries and Capacitors?

Batteries and capacitors seem similar as they both store and release electrical energy. However, there are crucial differences between them that impact their potential applications due to how they function differently.

A capacitor consists of two or more conductive plates separated by a dielectric. When an electric current enters the capacitor, the dielectric stops the flow and a charge builds up and is stored in an electric field between the plates. Each capacitor is designed to have a particular capacitance (energy storage). When a capacitor is connected to an external circuit, a current will rapidly discharge.

In a supercapacitor, there is no dielectric between plates; rather, there is an electrolyte and a thin insulator such as cardboard or paper. When a current is introduced to the supercapacitor, ions build on either side of the insulator to generate a double layer of charge. (See figure 2.) Supercapacitors are limited to low voltages, but very high capacitance, as a high voltage would break down the electrolyte.

Different battery types are distinguished by their chemical makeup. The chemical unit, called the cell, contains three main parts; a positive terminal called the cathode, negative terminal called the anode, and the electrolyte. The battery charges and discharges through a chemical reaction that generates a voltage. The battery is able to provide a consistent DC voltage. In rechargeable batteries, the chemical energy that is converted into electricity can be reversed using an outside electrical energy to restore the charge.

While batteries and capacitors have similarities, there are several key differences. The potential energy in a capacitor is stored in an electric field, where a battery stores its potential energy in a chemical form. The technology for chemical storage currently yields greater energy densities (capable of storing more energy per weight) than capacitors. However, when a battery is discharging it can be slower than a capacitor ability to discharge because there is a latency associated with the chemical reaction to transfer the chemical energy into electrical energy. A capacitor is storing the electrical energy directly on the plates so discharging rate for capacitors are directly related to the conduction capabilities of the capacitors plates. A capacitor is able to discharge and charge faster than a battery because of this energy storage method also. The voltage output of a supercapacitor declines linearly as current flows.

This table compares the pros and cons of batteries and capacitors

While other differences exist, batteries and capacitors do have some overlapping applications. However, in general batteries provide higher energy density for storage, while capacitors have more rapid charge and discharge capabilities (greater Power density). The demand for fast portable power has researchers trying to increase charging and discharging times in batteries, while increasing storage capacity in capacitors. While research continues to improve batteries and capacitors there are still have distinct characteristics that make each applicable to individual uses. 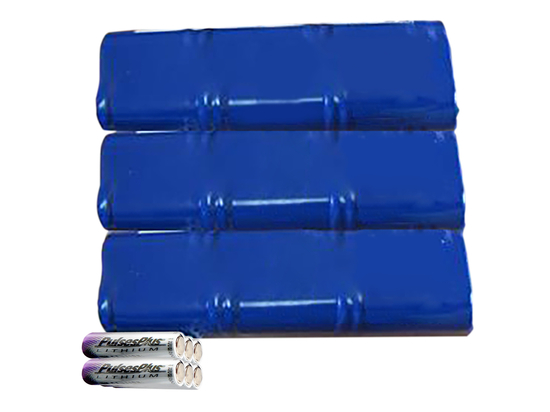 Three packs of supercapacitors (in the blue package), consisting of six D-size cells were able to provide and store the same amount of electrical energy as the smaller pack of six AA-size TLI 1550 Li-ion rechargeable batteries.