This small-footprint trunnion rotary transfer machine includes an isolated cell to perform full OD turning between centers for improved concentricity compared to flipping parts in a station for backside turning or moving the part to another clamping position.

High-production machine shops are often attracted to rotary transfer machines because of their capability to produce precision parts fast. But, imagine adding a turning operation to the transfer machine that runs as a disconnected cell which is free of the drive and machining factors that affect the other stations. This additional isolated turning cell is said to provide highly precise concentricity by enabling turning along the full length of the part, compared to flipping a part and performing backside turning or moving the part to another clamping position to complete it.

Winema’s RV10 Flexmaster rotary transfer machine enables users to machine the entire external contour of a workpiece without positioning errors to micron-level accuracies. The precision turning cell (PTC), according to Tobias Rapp, head of sales at Winema, makes it possible to clamp a part between centers or by collets while completing OD turning on the machine as well as boring.

Rapp says this compact, rigid and stable machine offers fast cycle times and changeover times for small parts (2- to 12-mm in diameter) made of various metals in the form of bar, coil and blanks. It is especially useful for high-volume applications in the automotive, aerospace and electrical industries, but also for part families or small batches because of its fast changeover times and high flexibility. He adds that electric vehicle (EV) part production has been a popular use for the RV10 in Europe, where the government is pushing EV production.

Winema, located in Grosselfingen, Germany, began creating the RV10 Flexmaster in 2013. At the time of its development, the precision turned parts market had a trunnion-type mechanical rotary transfer machine available in the U.S. that was designed for users with only one part to machine and could not easily accommodate changeover, the company says. However, the market was changing. It became evident that a full CNC transfer machine was in demand. It felt machine shops needed high-volume production for more lots of small parts as well as a machine with fast changeover that a mechanical machine could not provide. Therefore, Winema says it filled that void with a small, compact and rigid full-CNC transfer machine that was made for precision, flexibility and fast changeover times (usually 30 to 60 minutes, but ranges from 15 to 120 minutes, depending on the part requirements).

This trunnion-type transfer machine with 10 clamping stations was designed especially for machining parts 12-mm diameter by 80-mm in length and smaller. The RV10, the smallest Flexmaster, also has a small footprint of 2.4 m × 1.2 m﻿ and stands at 2.1 m. The machine weighs 20,000 lbs, which Rapp says is a necessary rigidity for the machining of small, complex parts.

In a conventional rotary transfer machine, it is usually impossible to do a complete OD turning process because the chuck holding the workpiece obstructs a portion of the outside of the part being machined. However, the RV10’s precision turning cell can transfer the workpiece into the PTC with an independent coordinate system where it can perform a turning process in isolation. When turning between centers, accurate concentricity remains consistent down the entire length of the workpiece which, according to Rapp, is 20 microns for this machine. He says this high concentricity is normally found on lathes and multi-spindle machines, but not on rotary transfer equipment.

Although multi-spindles can produce such high concentricity, Rapp explains the RV10 can be a better option. “Multi-spindle machines can only machine from one side, then they unclamp the workpiece to reverse it to put it back into the spindle in the clamping jaw,” he says. “While doing this, you lose cycle time, and those times for further operations will accumulate.”

The machine’s PTC features two turning tools with Capto interfaces. Three PTCs can be integrated into each machine as an option.

The RV10 Flexmaster, which uses high-pressure coolant delivery, has many benefits for small, complex part machining, especially for turning at high volumes that have already been mentioned. However, another benefit is the array of metals this technology can machine. Rapp says it has been tested on a range of metals (including steels, copper, brass and titanium) while realizing long tool life for each, which is critical for rotary transfer machines.

While traditional rotary transfer machines only machine one part, the RV10 can machine two parts simultaneously with its double-feeding capability. Two coils, bars or blanks can be fed at once. So, when that is the case, half of the machining stations/spindles are devoted to one part and the other half of the stations/spindles to the second part. To cut down on cycle time, Rapp says most users only process one part at a time. 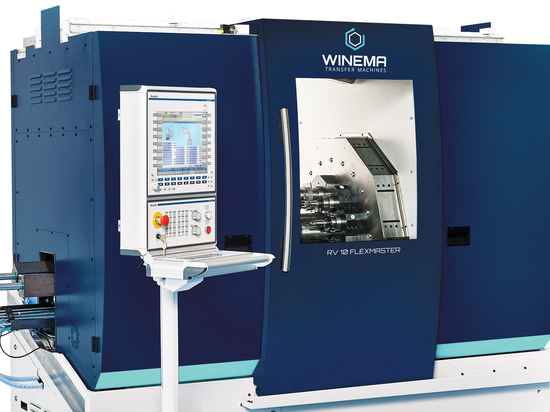 Winema’s RV10 Flexmaster achieves short cycle times due to the dynamic direct drive of the indexing table; the indexing time of the table is under 0.3 second. 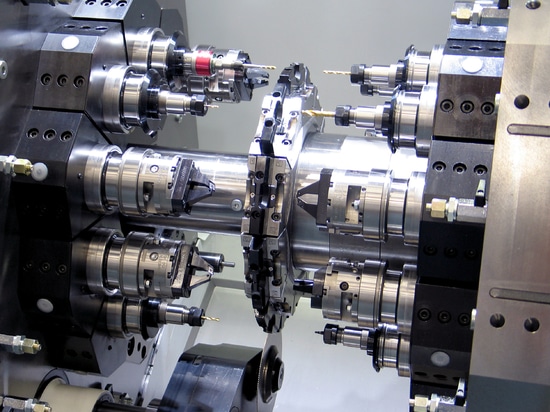 The RV10 Flexmaster offers the possibility to carry out milling and drilling operations with up to four radial stations (thread milling and contour milling). Thanks to flange angular head operations (such as milling widths), operations such as polygonal milling, slotting, drilling partial front, milling circular contour and so on can be carried out. 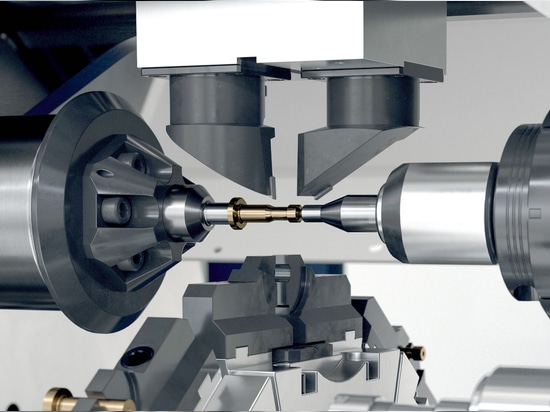 The RV10’s precision turning cell (PTC) can transfer the workpiece into the PTC with an independent coordinate system where it can perform a turning process in isolation.