In line with its EverMinds, Borealis has been collaborating with Uponor to enhance the sustainability of cross-linked polyethylene (PE-X) pipes. The resulting PEX Pipe Blue is the world’s first pipe portfolio made from PEX with renewable feedstock.

The construction industry would also like to become more sustainable. This hinges on the availability of more environmentally friendly materials. To this end, plastics manufacturer Borealis has teamed up with pipe specialist Uponor to develop pipes made of bio-based cross-linked polyethylene (PEX). Borealis claims that these are the world’s first PEX pipes made with renewable raw materials to achieve ISCC Plus certification.

Called PEX Pipes Blue, the products are based on PE sourced from the Bornewables range. They are produced from second-generation raw materials such as pulping waste or residues from food processing. According to the company, the pipes’ carbon footprint is up to 90 % smaller than that of conventional fossil-based PEX pipes. This is expected to help companies in the construction industry to achieve their sustainability goals for plumbing, heating, ventilation and air conditioning systems. The claimed smaller carbon footprint is based on calculations of the Environmental Product Declaration (EPD) in accordance with EN15804+A1 and CML/ISO21930 standards.

“In our PEX Pipes Blue range, which is based entirely on renewable raw materials, we are giving our customers a chance to slash the environmental impact of their installations. We are convinced that PEX Pipes Blue will soon be the new reference standard in this important market, thanks to the use of Bornewables and its enormous potential to reduce the carbon footprint,” enthuses Robert Molund, CEO of Uponor. 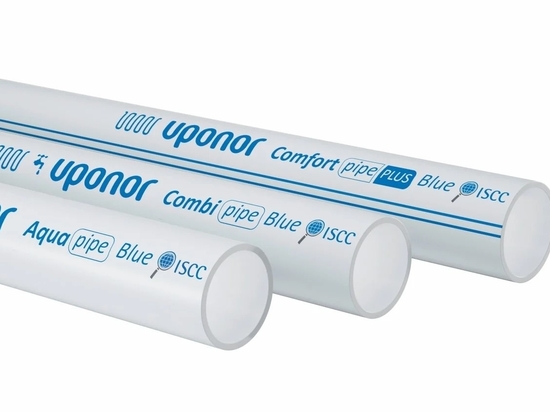 The pipes are the world’s first variants to be made with ISCC Plus certified bio-based PE-X.