Nowhere in the world are cities currently growing faster than in China. In fact, skyscrapers seem to be springing up like mushrooms in Shanghai and Beijing.

To keep up with this growth, construction companies must come up with new building equipment to match ever-increasing challenges. One such machine is the portable concrete pump from Chinese construction machinery manufacturer Zoomlion, Changsha City, Hunan. It reaches up to a height of 101.18 m, which even attracted interest from Guinness World Records. Apart from its sheer size, the Zoomlion pump also boasts some impressive hydraulics.

The design of a machine like the concrete pump always has to satisfy conflicting expectations. The hydraulic system must transmit enough power to move the machine’s concrete nozzle quickly and safely to its destination. On the other hand, the hydraulics must achieve precise positioning

Zoomlion offers a concrete pump that has a vertical reach or more than 100 m. The high power and precise control is achieved using a pair of Bosch Rexroth A4VG axial-piston pumps.

. Naturally, that has an impact on the selection of components. “The limited load bearig capacity requires all the main components to be highly efficient with as low dead weight as possible,” offered Binxing Wu, chief engineer at Zoomlion. He and his team chose Bosch Rexroth’s latest axial-piston pump, model A4VG, for their record-breaking concrete pump.

A few PowerPoint slides were enough to convince the Zoomlion engineers that they had found their new feed pump. All the items in specification were checked off: high operating pressure, large displacement, and integrated functions tailored to the required application. The Zoomlion uses a pair of tandem-mounted pumps, each sized at 180 cc/rev.

For safety and equipment longevity, no critical vibrations can be permitted to arise in the placement boom, despite its enormous length. However, the A4VG bidirectional piston pump moves over center so rapidly and gently that no such vibrations can occur. The pump can move from full displacement in one direction to full displacement in the other in no more than 200 msec. Furthermore, its integrated pressure relief system prevents pressure peaks from developing in the system.

On paper, everything was as it should be. Now the ball was in the project engineers’ court, as they had to integrate the A4VG pump into the system as a whole. The greatest challenge was dealing with different standards from the different countries. The engineers had to make several adjustments to joints and connections for the pump to run smoothly in Chinese machines. “In cases like this, of course, our regional company in the country concerned makes our work a lot easier,” explained Christian Frick, project engineer at Bosch Rexroth, Lohr, Germany. “Working together with our Chinese colleagues and in a number of personal meetings with the customer, we were able to meet all of Zoomlion’s needs very rapidly.”

The project partners took the hurdles in delivery periods and logistics just as smoothly, although time was especially scarce in the project. Work started in the spring of 2012, and the machine needed to be completed by October. Here, too, communication was everything. Sales and logistics in the two companies cooperated so efficiently that in the end the best possible process was adopted and the concrete pump arrived promptly for the presentation.

“The use of the A4VG pump in the concrete pump has a positive effect on the Chinese market. It puts the products from Zoomlion on a new level,” said Zhicai Zhang, Bosch Rexroth’s Trade Sector Manager for concrete machines in China. “On the basis of the demand and market feedback, this concrete pump has excellent potential for the future, even beyond its 100-m height,” added Binxing. Both men are convinced that even more world records will soon be broken in China with the aid of modern hydraulic technology. 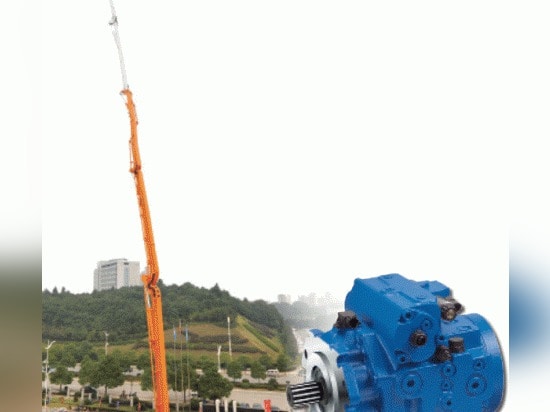