An offensive for more flexibility in the drive train

RINGSPANN is massively expanding its portfolio of non-shiftable shaft couplings

RINGSPANN is beginning the second half of 2018 with a large-scale product offensive in the field of shaft couplings. The admission of five completely new coupling types and the supplementation of numerous existing models amounts to a massive expansion of the overall range. The full-range supplier is thus providing engineers and product developers in industrial drive technology with even more options for the realisation of safe, powerful and installation space-optimised connections between shafts, motors, gearboxes and machines. The new couplings will be on display publicly for the first time at this year’s Motek, where RINGSPANN will be exhibiting in Hall 8 (Booth 416).

Bad Homburg, August 2018. – Barely a month goes by without RINGSPANN being able to announce the implementation of the next stage of its development towards becoming a one-stop supplier for high-grade drive technology components. Just a few days ago, the company’s brakes and coupling division announced the massive expansion of its range of non-shiftable shaft couplings. It is important to realise that RINGSPANN has been devoted to the development and production of safety and starting clutches shiftable under load for more than 60 years. “However, this latest expansion of the product range is as yet unrivalled in the history of the company”, stresses divisional manager Franz Eisele. While the focus of RINGSPANN’s portfolio in this field had been previously placed primarily on flange, flexible and cone clamping couplings, the overall selection is now being expanded thanks to the current product offensive with five completely new models. What that means: With immediate effect, you can now also find gear couplings, grid couplings, disc couplings and pin-and-bush couplings and jaw couplings ready to deliver. “This range now allows us to offer a total of eight models that cover almost all technically relevant types of rigid, torsionally stiff and elastic shaft couplings that are currently needed in industrial drive technology”, says Franz Eisele.

Across all eight models, the now available RINGSPANN spectrum of shaft couplings covers an astonishing range of nominal torques from 2.0 to 1,299,500 Nm! This also means that purchasers and engineers from every conceivable industrial sector and branch now have a comprehensive range of non-shiftable shaft couplings for applications in almost every area of drive technology available to them. Franz Eisele explains: “The beneficiaries of our comprehensive coupling range will not only be our current core target groups in conveyor technology, crane construction und gear manufacturing, but also many other plant manufacturers and mechanical engineers – for example those in fluid and process engineering, raw materials industry and steel production.”

A complete overview of RINGSPANN’s new portfolio of shaft couplings can be found in the freshly issued product catalogue 2018/2019, which is available for free download here on our website. Here you find all coupling types and variants sorted according to design and area of application and described and depicted: The cone clamping couplings and tru-line flange-couplings for rigid connections; the gear, disc and flexible couplings for torsionally stiff connections; the grid couplings for initially elastic and later torsionally stiff connections; and the pin-and-bush and jaw couplings for elastic shaft connections. “We offer the suitable coupling for applications in which the torque is transferred torsionally stiffly without phase shift but the shaft displacements need to be compensated, just like for applications in which a defined torsional stiffness must be ensured through elastomers. The coupling connoisseurs amongst us may miss the highly elastic elastomer coupling model; but we will soon be putting that right”, says divisional manager Franz Eisele.

And what the customer has come to expect with freewheels, brakes, shaft-hub-connections, overload clutches, clamping fixtures and push/pull cable systems of RINGSPANN naturally also applies for shaft couplings: Customer-specific modifications can always be realised beyond the standard version shown in the catalogue to adapt series clutches to unusual and special applications.

The main function of a shaft coupling is the connection of two shafts and the transmission of torques and rotational movements. Furthermore, shaft couplings are also required to fulfil a number of additional functions such as compensating shaft misalignment, dampening torque impulses and vibrations, protecting machines and drives against damages through overload etc. That is why many designs have emerged that can be differentiated in accordance with VDI 2240. One distinguishes primarily between shiftable (manual, speed-controlled, direction of rotation-controlled, torque-controlled) and non-shiftable shaft couplings. Since it is often not possible to cover all requirements with one design, you will often also find combinations of shiftable and non-shiftable couplings in industrial applications.

The non-shiftable couplings are differentiated between:

The shafts are connected together rigidly by the coupling. Torques and rotational movements are directly transferred without a rotational angle offset. The couplings cannot, however, compensate any axial, radial or angular misalignment of the shafts. Accordingly, significant reaction forces can arise during operation for example due to inadequate alignment or thermal deformations that additionally stress the bearings of the drive train.

They act in the peripheral direction torsionally stiff, i.e. torques and rotational movements are transferred almost without rotational angle offset. Depending on the design, however, these couplings can compensate axial, radial or angular shaft misalignment.

These couplings are characterised by a high degree of torsional elasticity and large spring travel. This enables them to have a high damping capacity and can thus reduce rotational vibration and load impacts. By selecting a suitable elastomer, you can also influence the natural frequencies of the drive train in such a manner that they lie outside the operating speed range of the unit. This prevents resonance vibrations and limits torque peaks. 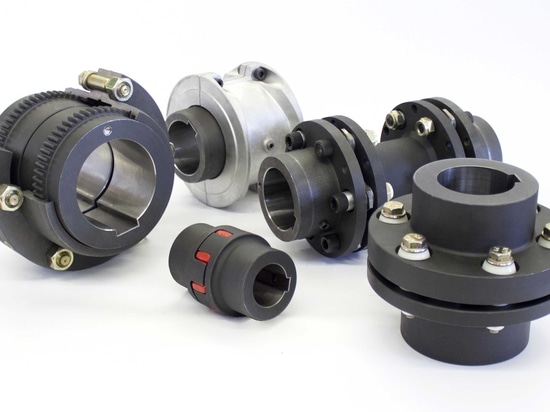 Thanks to the admission of five completely new coupling types and the supplementation of numerous existing models RINGSPANN is thus providing engineers in industrial drive technology with even more options for the realisation of powerful connections between shafts, motors, gearboxes and machines. (Image: Ringspann) 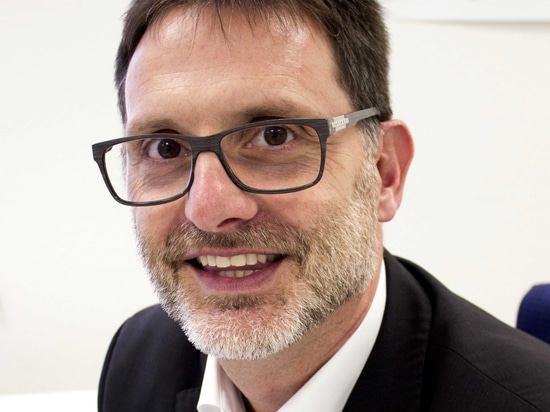 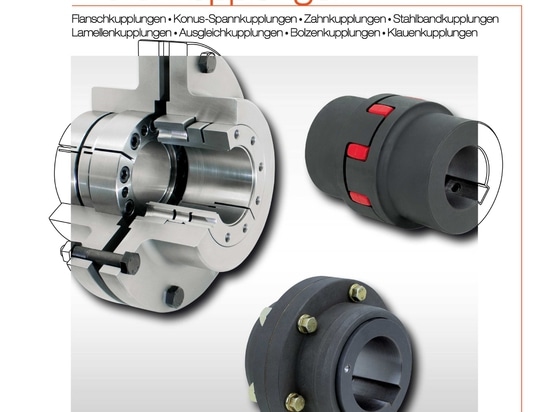 A complete overview of RINGSPANN’s new portfolio of shaft couplings can be found in the freshly issued product catalogue 2018/2019, which is available for free download here on our website. 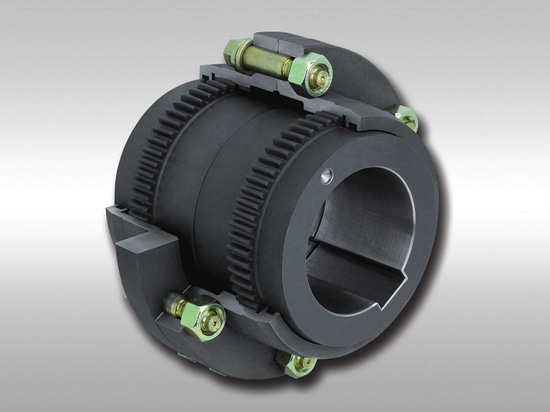 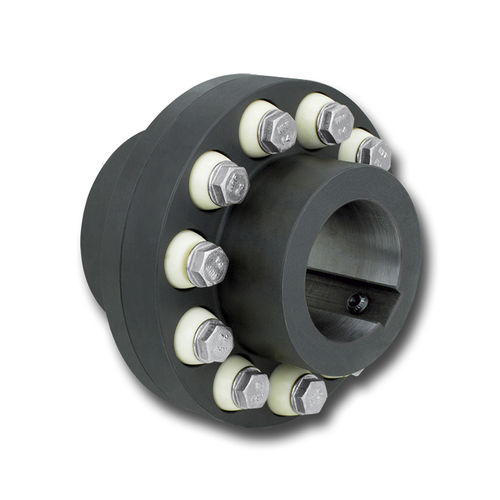 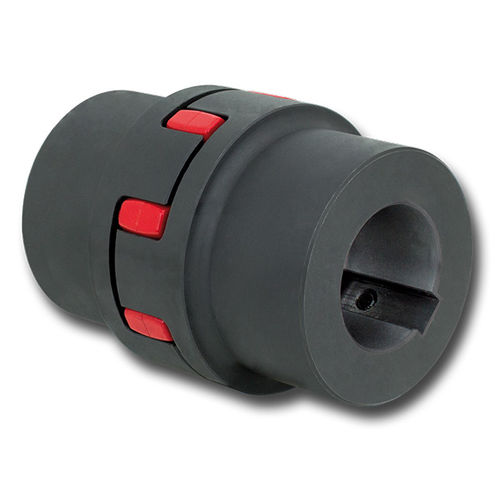 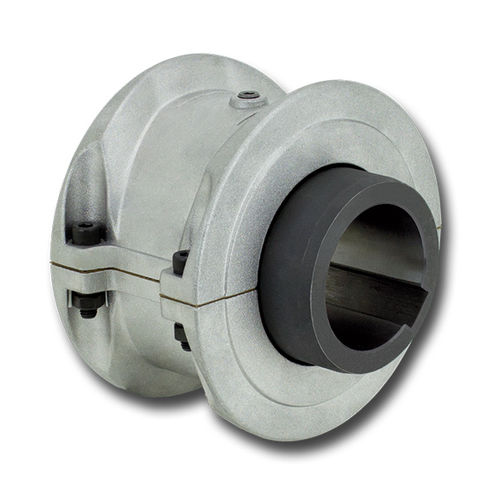 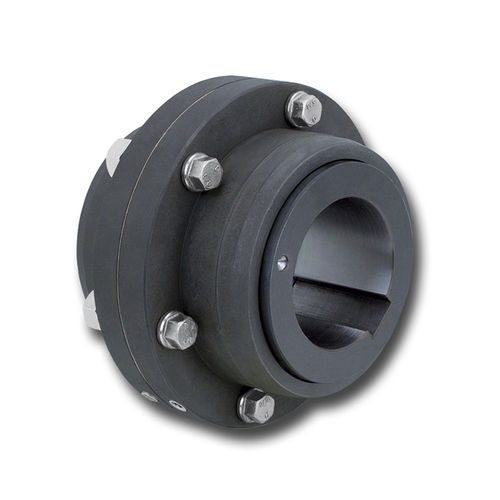 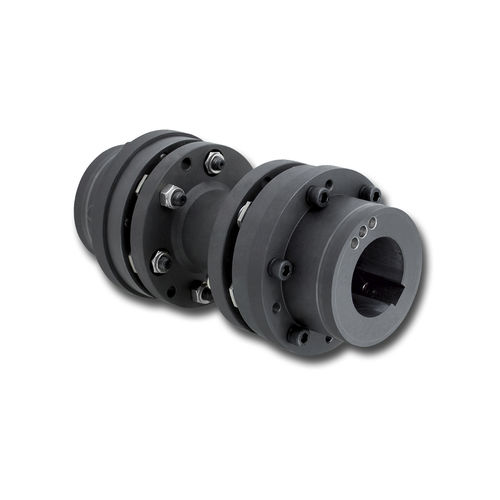 Manufacturers of gear cutting machines and users in the field of fine machining should make a beeline for Booth E22 in Hall 3 at this year’s EMO. Here, RINGSPANN will once again be presenting the youngest star of its comprehensive clamping fixture range: The mechanical expanding sleeve mandrel HDDS. As a both precise and flexible alternative to hydraulic expanding clampi... 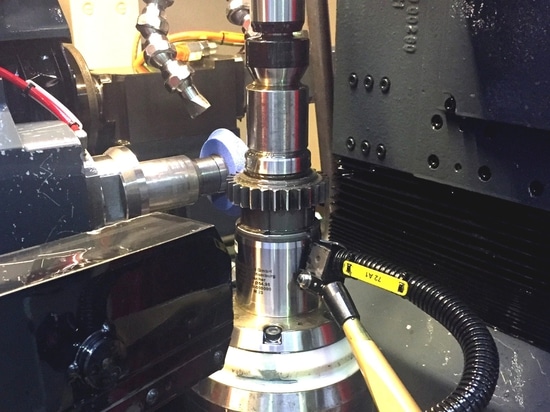 The electromagnetic disc brakes from RINGSPANN rank among the essential components of countless drive systems in mechanical engineering and plant construction. They can be deployed for stopping, control and holding and cover a very large application spectrum with braking torques ranging from 94 to 6,590 Nm. These compact industrial brakes received their UL and CSA certif... 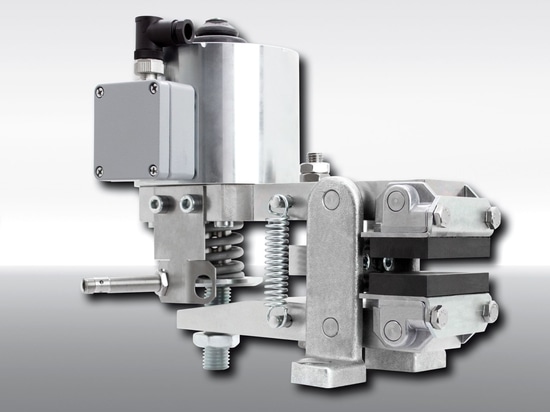 Among the highlights from RINGSPANN’s appearance this year at EMO is the new clamping coupling for the fixing of driven rotary/swivel tables in multi-axis machining centres. Shortly after first being presented last Autumn, this mechanical, hydraulic high-precision solution has established itself as the favourite of countless renowned manufacturers of tool machines and ro... 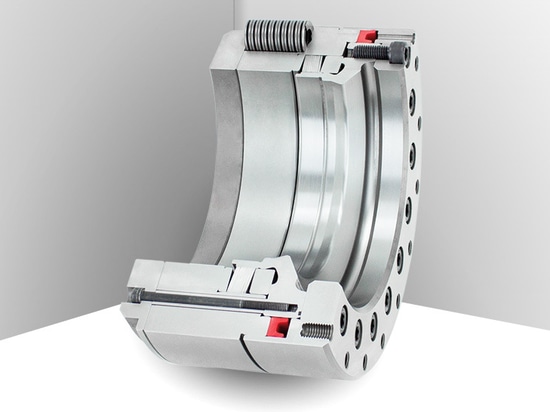 RINGSPANN’s ongoing productive offensive in the field of non shiftable shaft couplings since Autumn 2018 has been very well received by designers and developers in industrial drive technology. Thanks to the completion of existing models and the incorporation of new coupling types in its overall range, the company now offers many alternatives for the realisation of safe c... 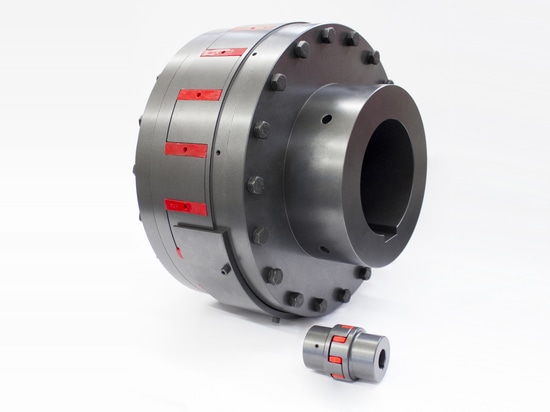 Safety and efficiency in the drivetrain Safety and efficiency in the drivetrain
*Prices are pre-tax. They exclude delivery charges and customs duties and do not include additional charges for installation or activation options. Prices are indicative only and may vary by country, with changes to the cost of raw materials and exchange rates.
Compare
Don’t compare this product
Compare up to 10 products